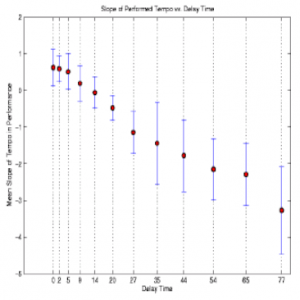 An empirical study of the effect of delay on ensemble accuracy looked at whether a threshold exists, beyond which rhythmic music is too difficult. No threshold cliff was found. Pairs of musicians were placed apart in isolated rooms and asked to clap a rhythm together. Time delay from source to listener was manipulated across trials. Longer delays produced increasingly severe tempo deceleration and shorter delays (< 11.5 ms) produced a modest, but surprising acceleration. A linear model fit the data extremely well. The finding that moderate amounts of delay are beneficial to tempo stability seems, at first glance, counterintuitive. The paper discusses the observed effect. Overall, there is good evidence that sensitive ensemble performance can be supported over rather long (regional) network paths.